PATIENTS AND METHODS: We prospectively identified 60 patients diagnosed with stage I EOC aged ≤ 40 years. Patients in the fertility-preservation group underwent salpingo-oophorectomy on the side of the affected ovary in addition to incisional biopsy or wedge excision of the ovary on the other side. Patients in the radical surgery group underwent total hysterectomy and bilateral salpingo-oophorectomy. We followed up all patients for 5 years to assess their reproductive and oncological outcomes.

CONCLUSION: Fertility sparing surgery could be adequate alternative to radical surgery for young females with stage I EOC.

In the current study, we aimed to compare between radical surgery and fertility saving surgery in females with stage 1A-C epithelial ovarian cancer regarding recurrence rate and patients survival rates in addition to evaluating reproductive and obstetric outcomes for stage I epithelial ovarian cancer females who were managed by fertility saving surgery.

The study design was approved by local ethics committees of Faculty of Medicine, Zagazig University. We prospectively identified patients diagnosed with stage I epithelial ovarian cancer aged ≤ 40 years, who were admitted to Department of Obstetrics and Gynecology of Zagazig University Hospitals in the period between 2012 and 2017. The diagnoses, clinical and histopathological staging were assessed based on the World Health Organization Classification of Female Reproductive Organs Tumors 4th edition and International Federation of Gynecology and Obstetrics (FIGO) staging system (2014).

Inclusion criteria for fertility saving surgery: Nulliparous patients in child-bearing age with a strong desire to maintain their fertility and have a sure diagnosis of stage I epithelial ovarian cancer were proposed a fertility-sparing surgery if patients refused to be treated with the conservative approach or they were postmenopausal they underwent radical surgery.

We performed complete surgical staging for both groups by performing omentectomy, lymphadenectomy, appendectomy, peritoneal washings, and multiple random omental biopsies. Evaluation of all the pathological slides was performed by 2 expert pathologists without previous knowledge of clinical data or patient outcomes. Adjuvant chemotherapy was given after surgery to patients at high risk for recurrence as FIGO stage IC or high grade tumors or tumors with focal clear-cell morphology. Chemotherapy regimen composed of TC (paclitaxel and carboplatin) and PC (cyclophosphamide and cisplatin) cycles number ranged from 3-9 cycles. After finishing primary treatment we followed-up patients monthly for the first six months, every two months for the first year, every six months for 2 years then yearly for 5 years. During followup visit we performed complete clinical examination, pelvic examination, ultrasound scan and evaluation of serum tumor marker CA 125.

Correlation between both groups regarding oncologic outcomes. After a median follow-up period of 56 months (range, 25-60 months), 13 (21.7%) patients relapsed, 8 (13.3%) died of the disease from all included patients.

Reproductive outcomes of fertility preservation surgery group of 25 patients underwent fertility preservation surgery, 18/25 (72%) tried to get pregnant. 3/18 (17%) patients were diagnosed with infertility, 15/18 (83%) pregnancies were recorded, including 13 live births, 1 miscarriage, and 1 intrauterine fetal death. Five/25 (20%) patients were unable to get pregnant due to recurrent disease in the preserved ovary. 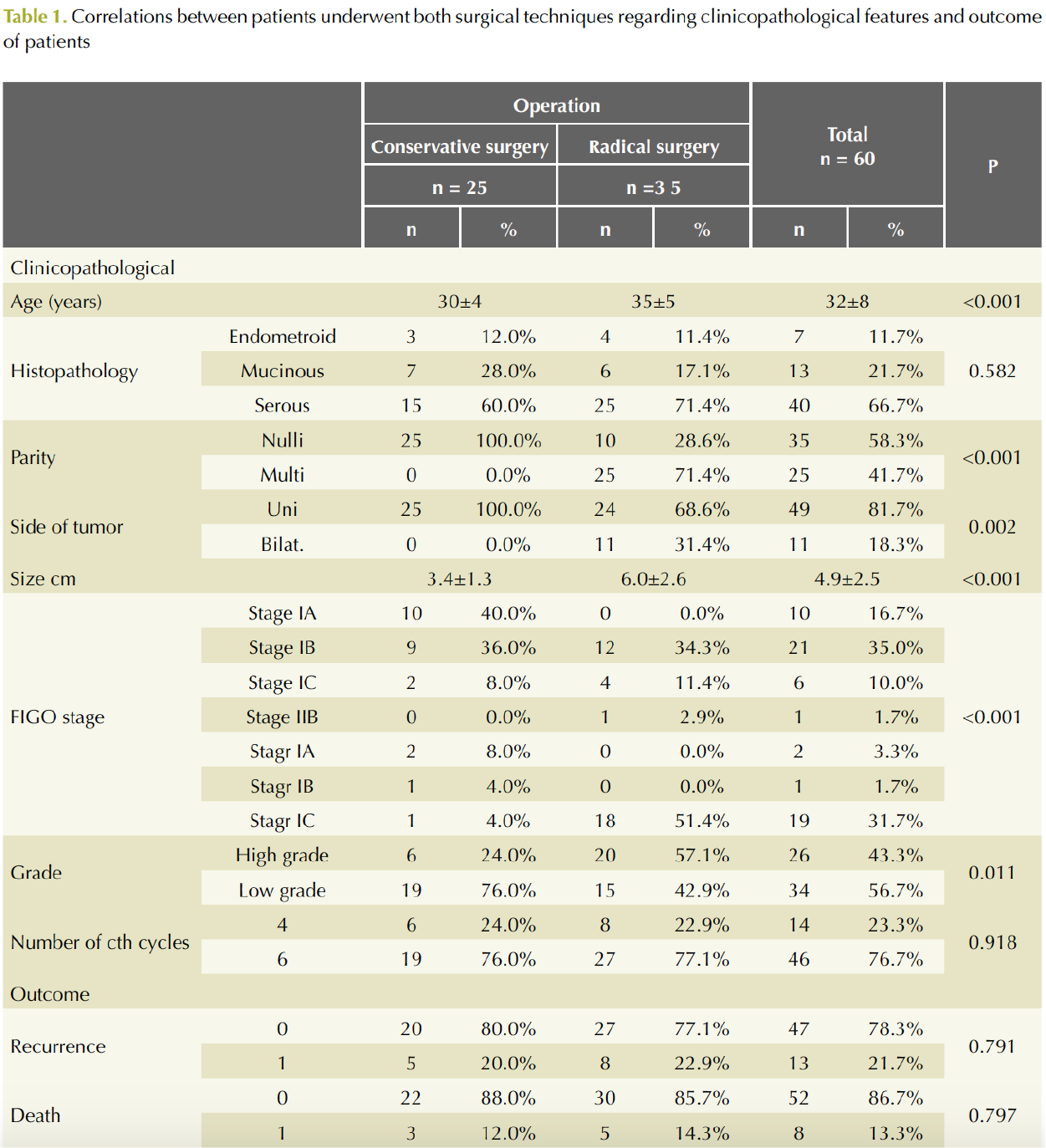 Surgical management of young females with cancer ovary that is primarily limited to the ovary is a challenging issue particularly if the patient was nulliparous and wishes to preserve her fertility.9 There are few studies regarding comparison between radical surgery and fertility saving surgery and the management strategies were not standardized yet.10

Previous studies have considered cases with high grade tumors and tumors with stage IC have a higher relapse and fatality risks and could not be considered for fertility saving.

However, recent studies showed that there are no clear evidences that radical surgery in stage I epithelial ovarian cancer of any grade could improve patients’ oncological outcome,9-14 which support our findings regarding benefits of fertility saving surgeries after application of strict precautions and inclusion criteria of patients. Fruscio et al10 analysis results confirmed our findings.

Jiang et al11 showed cancer specific survival rate in fertility sparing surgery group was better than that in the radical surgery group this is because in their studies most high risk patients with higher grade tumors and clear cell morphology underwent radical surgery.

In recurrent cases in the fertility saving group pattern of recurrence was localized and less disseminated than patients in the radical surgery group which presented with widespread disseminated recurrences which was similar to results of Jiang et al11 and Bentivegna et al.16

This was explained by that recurrence in the preserved ovary has a more liability of saving patients life by surgery and chemotherapy which is not inversely affecting survival of patients underwent fertility sparing surgery.16

We concluded that fertility sparing surgery could be adequate alternative to radical surgery for young females with stage I epithelial ovarian cancer of serous, mucinous or endometriod morphology. Patients must be informed that their younger age is mostly associated with more liability of low-grade tumors with favorable histology, good prognosis in addition to an accepted high pregnancy rate which might increase liability of choosing the option of fertility-sparing surgery.

Additional future prospective studies including large number of patients were needed to compare between fertility sparing and radical surgery in epithelial ovarian cancer stage I regarding; endocrinologic, oncologic and reproductive outcomes for proving the success and safety of fertility sparing surgeries.